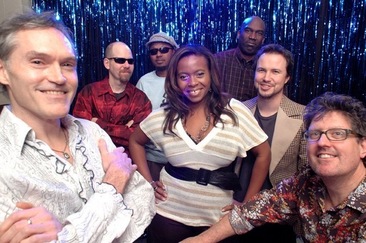 From secret underground laboratories, mixing lo-fi grooves to subterranean dance clubs dealing patented non-stop party vibrations the Hammerheads have been serving up the sugar in the national capital for over 10 years.

This is the love beam that will rock your body and blow your mind.

The Hammerheads music pays homage to the grandmasters of 70's/80's funk P-Funk , Chic, the JBs, Kool & the Gang, Ohio Players, Stevie Wonder, etc and in concert the band uses classic dusties along with their originals as a foundation of a non-stop jam... a hip hop sensibility of mixing applied to a live band.

The HHs are known for their high-energy, full on, over-the-top, live performances that earned them the award of Ottawa's favourite live band/act 5 years in a row as voted by readers of Ottawa Xpress magazine

The Hammerheads are well known as the 613's top party dance band - routinely filling clubs and playing countless private events - capable of keeping people on the floor all night long:


The Hammerheads released their first CD in late 99 on Flavaworm International Records – it featured 10 original songs from the funkside – topped the local Ottawa indie charts, hit #37 on the Earshot National CampusTop 50 Chart and garnered lots of CBC airplay. Their second CD – (((Aquarama))) – was released in May 2007 – six years in the making and featuring a school of assorted Hammerheads plus special guests including Vernon Reid (ex guitarist of Living Color) and reggae legend Vern Maytone of the Maytones – "a combustible fusion of sleek solid 70's funk married with reggae rap and sweet Philly soul strings guaranteed to satisfy even the most discriminating freak."

The Hammerheads distinctive music has been used in TV shows - CTV's Celebrity Pets – and movies notably " Everybody Gets Laid 2 Nite" from the Slamdance Award winning film "Jesus Christ Vampire Hunter".

In the summer 2007 long time singer Tim Devries was replaced by Iyono Ede whose powerful soul vocals has bought a new level of energy and musicality to the band. They are currently working on new material for the live show and starting to record a CD that reflects the new line up.

* May or may not contain other guest musicians DJs, Rappers and friends who want to get loose and rock the party